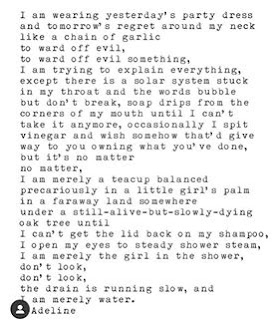 There’s something about the impact of a strong English teacher – for some reason they tend to foster in us a little more self esteem when it comes to writing prosperity. To be encouraged, to simply express yourself from a teacher, could give a student the break they need. In order to see what is possible with regards to writing and the worlds created within the cerebellum of our being.  Adeline as a lover of books, the pen, and teaching -- houses within her world the delicate intricacies of life.  I’d encourage all of you to check out my interview with @adelinewrites.

A: I’m tempted to say yes, but I think most of my bouts of writer’s block come from not taking time to write regularly. I think sometimes the best things to do for feeling a block in creativity are either to lean into it and give yourself a break or to push through and keep writing, even if the product is not what you want it to be yet.

RMMW: We all must deal with an irritating inner critic at times, how do you contend with yours?

A: I’m not sure I contend with my inner critic very well at all, so I’ve attempted to stop listening to her.  Lately I’ve been trying to value the process over the product and give myself credit for the act of creating instead of focusing on the product I produce; after all, I’ve declared a poem “finished” and then come back months later and found all sorts of alterations I could make, which has started to shape my thinking that creativity is really an ongoing pursuit more so than a finished piece.

A: I don’t, actually. Usually I just come up with an idea and go for it, or I have phrases/lines bouncing around in my head a little bit before I actually sit down to write a piece; if my writing habits were more disciplined, I might have rituals, but because I just write here and there and every where, my process doesn’t have any ritualistic aspects really.

RMMW: Do you feel that social media helps or hinders emerging writers? 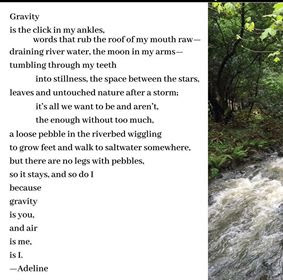 A: I think it can do either; in writing communities on social media, emerging writers can find a wonderful community of fellow creatives who are supportive and helpful; alternatively, social media can hold a new (or not-so-new) writer back in many ways. So much of the culture surrounding social media can hinder a pursuit of true creativity and improvement in that vein; we’re so driven by likes and comments that it’s easy to forget that social media engagement isn’t always authentic or valuable. I think it’s important for writers to find a balance when using social media to promote their work.

RMMW: Where is your favourite place to write?

A: Sitting in my bed or at a coffee shop. I don’t really have a certain place I go to write, so those are just my two most-likely-to-be-writing places.

RMMW: At what age did you start to write? What was the catalyst?

A: I started writing when I was young girl in a small white diary with flowers or something on the front; it had a little golden lock and a tiny key. I protected it religiously, as inside I did all of my best pondering and complaining about the world.
RMMW: Is there a specific theme or poetic style you've always wanted to explore but haven't? If yes, which one?

A: I don’t think so; I typically try anything I’m interested in, though I rarely write in specific forms.

RMMW: Do you think any subject can be made into a poem?

A: Theoretically, yes, and I think that some of the most beautiful poems are the ones that make magic out of the mundane. There’s something about watching soap bubbles glisten and pop in the sink or hearing wind chimes before a storm that’s incredibly poetic even though they’re seemingly uninteresting occurrences.

RMMW: Do you ever weave secrets into your poetry?

A: In a way, yes, I do. I write a lot about things I don’t talk about or try to harness a feelings that even if the poem that surfaces doesn’t describe a particular event in life, the feeling is there, and that’s a secret in a way.

RMMW: What was your favourite children's book? And why? 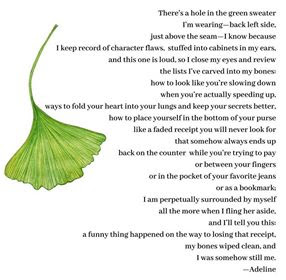 A: There are honestly too many to name (more likely I’m just terrible at choosing favorites), but I do really remember how much I enjoyed The Giving Tree and Charlotte’s Web. Those were always special to me as a child.

RMMW: Do you come from a literary background?

A: I majored in English in college and am now a teacher, so I suppose that I do. My father instilled a love of reading in me early on, and it just never dissipated.

A: Invisibility, I think––clearly, I’m nosy––or, actually, maybe flying. I’m afraid of heights, but I think flying might be fun.
Reactions: