Interview with Writer, Joseph A. Federico

Whenever I ask the superpower question, most answer with a really cool ability – Joseph A. Federico was one of the few who really brought it back to writing and advocacy. (Which honestly fills my eyes with tears, as so many wonderful writers are constantly overlooked and taken advantage of – especially when they have little to no knowledge of the publishing industry.)  I’ve not known Joseph for long at all but, from the article he wrote for CCIQ Press last month and this interview really speak of a person who is altruistic – who wants writers to prosper. The competition is cutthroat out there and Joseph constantly asks the question of how as writers -- we can improve.  Joseph doesn’t turn his nose up at it – he creates articles where writers can attain knowledge with regards to making our characters three dimensional creatures as opposed to cardboard cut out soulless beings, or how to design a wonderful character persona, or even making them more human.  To be completely frank, being a writer is truly one of the best things in the world – it does house a true double edge sword. Nevertheless, what you receive in return for all your pain and hard work could be a beautiful piece of literature. Especially if you take all experience Joseph shares via his advice.  I suggest you check out his site http://josephafederico.com/ the diversity of information offered is tremendous.  And of course, please do follow on Twitter: @writingman26, Instagram: josephafederico, and Facebook: @authorjosephfederico. 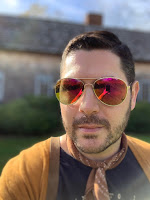 JF: Yes! So my first novella, Voudou Juice, took from summer 2012 to spring 2017 to write. It started off as a summer project, only breaking out the handwritten manuscript occasionally, when the mood hit or while I was on vacation. Truthfully, what broke the “curse” was forcing myself to take a winter writing challenge to assure I’d get writing done, and also choosing a launch date. I plan ahead, so once I knew I have an end date, I had to kick into high gear. Also, I create playlists on iTunes to get creative juices flowing. They help...a lot!

RMMW: We all must contend with an inner critic, how do deal with yours?

JF: Harshly. I take my own feedback into account with a grain of salt most times. I’m very critical of my work as I’m editing it and preparing for a launch, for instance. But then I let go and let god...the public will either love it or hate and sometimes, you have to be alright with that. 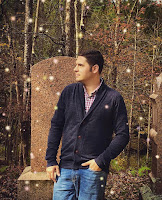 JF: I sure do. I agonize over plot, characters and time period prior to writing. I know, who doesn’t!? However, when it comes to historical fiction, I visit landmarks and thoroughly imagine what my characters could be doing in said dwelling. Then, if the characters speak to me and they’re open to discussing terms, that’s when I’ll start.

JF: Wow, those have been amazing events. Well, being a novelist, that was special enough just being included. I felt like a modern Bukowski coming to the round table of local writers. There was an energy in the room that was incomparable. It’s something special that I wish other local communities would explore. And Glen, he’s the best...his attitude, his prose, his outlook on life. He really helped bring out the lighter side of me regarding my creativity years ago. And Allison is a sweetheart. Here’s hoping we execute a winter reading!

RMMW: What is your process?  Do you grab a pen and parchment or right to a computer or device?

JF: Pen and pad for me...always. It’s a pain to edit but, there’s no worrying about a virus attacking my work and potentially losing it.

RMMW: When you write, does your imagination ever flourish to the point that you are able to see a poem or pictures of a poem through your minds eye -- before committing to paper? 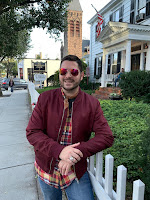 JF: When I write poetry, namely southern themed, yes, I can paint pictures with my mind’s eye. For instance, I write about Spanish moss a lot.

RMMW: What are your favourite themes to scribe in?

RMMW: Who are your favourite indie poets?

RMMW: Do you listen to music when you write poetry?  If yes, what's on your current playlist?

RMMW: What do you feel is the crux of modern-day poets?

JF: being authentically you - it’s hard in today’s world.

RMMW: As someone who has written articles and poetry -- do you feel that each one of these styles requires different writing techniques when finally, being committed to paper or digital document?

JF: Absolutely - but they all also require a major time commitment. 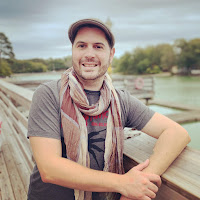 JF: When I was about 6, I wrote an article about Swamp Thing and Santa Claus. It was for personal entertainment purposes.

JF: Good question. I’m a child of the ‘90s and was, well, am still in love with RL Stine. Who recalls the Goosebumps book, Attack of the Mutant? I was very impressionable back then, so I’d have to say just the thought of being a superhero would be alright with me. I’d potentially fight against large publishers taking advantage of the little guy. By day, I’d be a PR agent, and by night, fight literary crime.