Posted by Rania M M Watts on January 18, 2020
"The less we say about it the better. Make it up as we go along.
Feet on the ground, head in the sky. It's okay, I know nothing's wrong."
My wife and I are too young to have had the opportunity to see Talking Heads live before their hiatus and eventual breakup in the late 80’s/early 90’s. But maybe more than any other, they are a band we bonded over. Our appreciation for the records and fondness of so many of their songs has grown even greater in recent years.
As an early birthday gift, I took my wife to see David Byrne’s American Utopia, 3:00 pm, January 12, 2020 - Hudson Theatre, NY.

The quote above is lyrics taken from Talking Heads song “This Must Be the Place (Naive Melody),” which is a song that would surely find itself on a personal list of All-Time Favorites. I find the lyrics, especially those 4 highlighted lines, appropriate to my thoughts and feeling leading up to and even now, after attending American Utopia. Feel free to listen below. below.

I kept myself pretty blind to whatever show information, details, reviews, etc. that could have been found swimming around the internet. Other than my own assumptions, I didn’t want and I didn’t need to know anything about it.
I guess it’s somewhat contradictory then that I have written this simple review, but if you are here reading, you probably aren’t worried or as freakin’ weird as me about stuff like this, right?
Either way, my purpose is not to critique or draw comparisons. I’m not going to provide a song-by-song run down of the whole show. No real spoilers are intended to be given. I’m sure there are plenty of other more professional and better versed journalistic takes out there, if that is what you want. My intent to writing this, like most anything else I write, is to help disentangle a big ball of sentiments.

There’s a lot of noise constantly rolling around inside (and outside) all of us. Inside me is screaming most of the time, a bit more lately. Music and song and a good live display, to me at least, is a transitory safe haven. But I notice myself struggling to locate this wanted refuge of late. I have been thirsty for something specific and uplifting. And this show struck me. Finally.
Yes, I enjoyed a few gin and tonics, but American Utopia was the actual thirst quencher.
While waiting in the lobby for the theatre doors to open, you could almost touch taste smell the buzz and anticipation in our collective breathing. Above the center double doors stuck a long, yellow sign- WHAT IS YOUR UTOPIA? 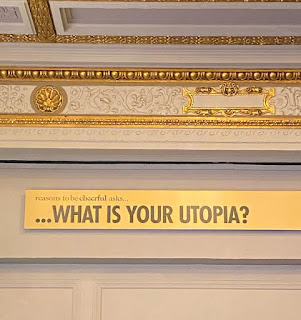 That question has been in my thoughts since. What does the word utopia mean to you? What would your utopia be comprised of? Is any of that achievable? Mull it over and get back to me..
I was on the cusp of an emotional break within the first minute of this show. Maybe that’s a slight exaggeration, it was probably closer to the end of that first song. And by the straight vocal open of the second song, I could feel a pressure building in the back of my eyes. That familiar strain pulling up a lawn chair and just reclining in my throat.

My feet were rooted to the carpet and my body solidified to the seat. I had 12 sets of eyes, each fixed on an individual performer as they drifted across the stage, sincerely doing their thing. Energetic and compelling. Stimulating and heartening. And so on and on. 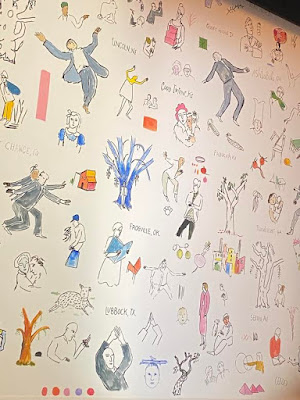 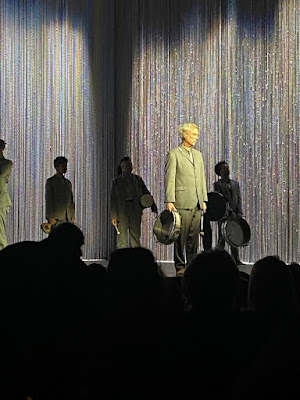 Any synonym for those words you could think up, they were that.
Each song performed was reborn right in front of us that afternoon. Immediately expanding souls with an added purpose and spirit. No longer could those simply be the great songs we listen to on a record or CD. And they’ll never be received in that same way again.


But perhaps, the greatest and most important and tugging piece of the afternoon, in my opinion, was not a Talking Heads or David Byrne original. It was a cover. I’d be lying if I said I knew the song before the show. And shame on me for not knowing of it. Hell You Talmbout - a Janelle Monáe song, If you are not familiar with it, listen below.

There is a bit for me to unpack still here. I’ve deleted several run-on sentences already. And it is probably for the best that I do not try to pen something enlightened as it will never fully illustrate or make clear what I would like it to. I did not know that Janelle Monáe song prior, but I was reading and seeing it on every performer’s face. They pulled us to North Charleston. To Bridgeton. The Staten Island sidewalk. Pushed us to Sanford. The police van in Baltimore. To Waller County and the couch in Detroit.
I don’t want to misplace that feeling. 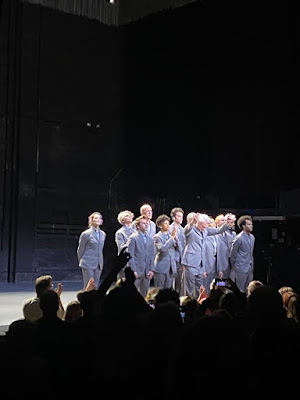 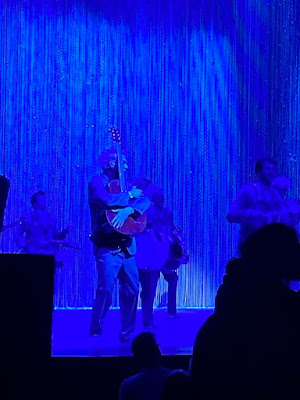 From there, the set was just a few songs longer. And lucky for me. The dam didn’t burst, but it was close to cracking. What’s the inner corner of your eye called? I may have swiped it dry once or twice.

Although the stage lighting was generally dark throughout, the show itself was like a spotlight. Pointing and pitching shadows and taking us full circle.

“It’s just us — and you,” was spoken by David a few times that afternoon.
It’s such a simple thought, but so true, right?

Observation. Community. A call to take action. And above all, hope and connection. I think that’s the essence. In spite of the past and what is happening today, this is our time and this is our chance to do something. Do something.
American Utopia could be the greatest live show of any kind that I have ever seen.
Reactions: