Posted by Rania M M Watts on December 27, 2019
You know, the majority of artists or poets I’ve interviewed dabble in more than one art medium.  I honestly find it fascinating how the brain, a complex piece of equipment in our human body can reach the optimal level of expression -- regardless of tools.  Ryan King, writes poetry/songs, plays music, and paints these incredible multi-hued and layered pieces. Definitely an experimenter regardless of artisanal media.  I guess, the key in life to keep yourself grounded, to allow your imagination and your brain power to genuinely work beyond the 10% most humans use.  Exposure to various artistic styles keep our brains from being rendered dull, boring, and monotonous pieces of meat. The capacity to allow our art in our lives for the purpose of enrichment – it may not generate physical wealth but the richness in your plasma will genuinely prosper -- not only with experimentation but with being open to a new art process.  Ryan lingers on his art in a fashion that makes individuals curious.  As one, will not know what he is going to do next.  For more information on Ryan, please follow on Instagram @vayouking.

RK: Well, I don't know if I think of it as a block. There are times when I try to write and it all just seems wrong. I could still write, but it would all be shit so I just don't even try. There was a time when this used to frustrate me as a songwriter, but, for some reason, with poetry I just wait for it to speak to me again. To overcome it, I just wait, or write out the bullshit until I get onto something, I know I can do something with. Sometimes you just need to give it a break and wait. Come back later. Listen to music. Watch a movies. Explore a different art form. Drink alcohol. Do drugs. Come back later. 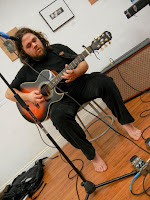 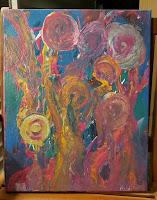 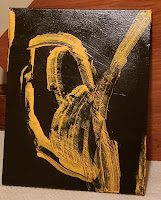 RK: I tell it to fuck off and if it doesn't listen, then I just trust in my abilities and my artistic voice. My inner critic is more of an asshole about my music than it is my poetry or painting. Maybe because I am such a consumer of music. Not sure.

RK: No. I just create when the feeling hits. Usually I'm not at home when this happens, I'm out doing
something that makes it difficult to get to pen and paper to jot ideas down, like being stuck at work or at someone's house or driving, etc.

RMMW: What came first playing with words or paints or instruments?

RK: Tough question. I suppose that words came first because I didn't get a guitar until I was 14 years old. I took piano lessons for a very brief time as a child, but I was never all that interested in growing as a piano player, but I have been jotting words down since as far back as I can remember; journalistic at first and that developed into creative writing. Painting is something that I pick up every now and again. I have just recently, within the last year, picked it back up as steady form of expression.

RMMW: What is your favourite theme to write about?

RK: I don't necessarily have a favorite theme. I write about many different emotions and situations. I suppose that I explore my own psyche a lot and then translate what I find into something interesting or striking to read. My style varies a lot between poems and seems to always be changing. Electricity, concrete, oceans, rivers, movement, decay, and the personification of many different things seem to be common themes for me. 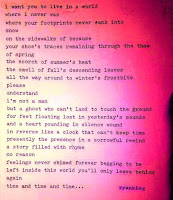 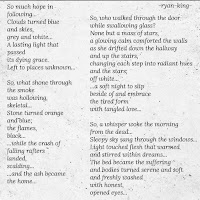 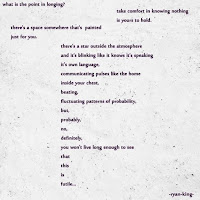 RMMW: What is your writing process, do you first put pen to paper or go to the computer or a device?

RK: Pen to paper first. Sometimes I start out at the typewriter. If I'm unable to use paper and ink, then I type in my phone.

RMMW: Where do you enjoy writing most?

RK: I love writing wherever I consider home to be at the moment. But it's a toss up between privately writing at home or writing at a local diner with too much coffee and some breakfast and the incessant chatter of other humans bubbling around me. If the humans get to be too much, then I can't write. But, really, I don't think I pick any favorites.

RMMW:  Do you think any subject can be transformed into a poem or song? 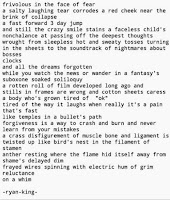 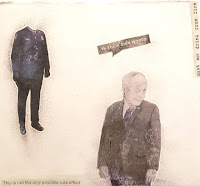 RMMW: What was the hardest piece you've written and why?

RK: The hardest poem I've written would have to be a series that I'm still working on, called, This is a Building. The difficulty in writing this comes from the fact that it started during a very chaotic time in my life when my mental health was declining rapidly, and some very big changes were happening, and I kind of knew where these changes were going to lead. I was manic for a long time, suicidal, very irritable and drinking way too fucking much and too often. So, the words came very naturally, but the first 3 poems in that series really took a toll on me emotionally.

RMMW: What authors did you dislike at first but grew into?

RK: Don Delillo. Most famous for his novel, White Noise. I wasn't very excited about his writing after reading that book, but I read another later and eventually came to really enjoy his style enough to read most of his novels to date.

RMMW: Do you listen to music when you write? And, who?

RK: Not always, but if I do, I often listen to a band called, Do Make Say Think. If the words are just there and flowing out, it doesn't matter what music is on or where I'm at, they will end up on the page.

RMMW: Do you think a big ego hurts or helps writers?

RK: I think it depends on how the ego is used. Confidence seems to be much more beneficial than welding a big ego. Confidence and belief in your craft and a willingness to listen to your creative voice and to not be fearful in expressing what it wants to say have helped me out a lot.

RK: As a child, I used to have the best flying dreams and ever since then I've wanted to fly.