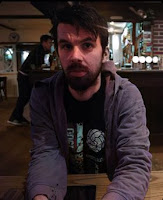 One time, when I was in Grade 9 Vocal Jazz class, my teacher who shall not be named -- who incidentally was worse than Voldemort! I honestly had never met a man with such little compassion for comprehension and appreciation of proper pronunciation of someone’s name.  He called me: Ranier, Rene, Renya, and many more abominations.  One day, I corrected him, his response was “whatever?!” – which in my humble opinion permanently makes him a douche bag.  Now, that being said, when Adam Shove’s (pronounced chauv) name had been constantly butchered during some live readings -- by those who did not take the care of learning the pronunciation – I genuinely took offence.  When you mispronounce a name, you are basically disrespecting the authentic essence of a human being.  Adam by nature is a minimalist, one of the true individuals I know who does not take words for granted.   If you have no idea who Adam is, I suggest you educate yourself… @thepoetshove on Instagram will take you to his depth riddled pieces.

AS: I think to myself is this dope? What are you trying to say? Does this say what you want to say at this moment of time

AS: A book or a poem? A book I try to think of what my theme is going to be and how everything is interconnected. Poems no, I will write on anything, I do quite often write while on the toilet.

AS: I admit defeat for the day, watch a film, and try to think of a random word

RMMW: What is your first memory with regards to writing poetry?

AS: Trying to impress a girl, which people say what a cliche, what do people expect I was 15 trying to get laid

RMMW: What do you feel good poetry ought to do?

AS: Make you think, feel for the writer, have that line that stays in your head and you can use it in everyday context.

RMMW: Who are your favourite indie poets?
I love @Caseywritesthings, she’s my main girl I will always have her back. @The_hack_poet I did a podcast with him, we connect on such a level.@Melissacombspoetry, that girl is amazingly wonderful and overlooked. @_drewkowski, @neural_delirium (I’m going drinking with her in Malmö), @Alchemical.poetica, @undermeyou, @shestarteditpoetry. I could list so many, the art of the co-sign is lost in poetry.

RMMW: What do you feel is the modern-day Poets greatest challenge?

AS: Trying to be an original fire, how do you say something that’s been said for all of time? You don’t you just have to stand out from everyone else which is easier said than done

RMMW: Do you have any other art mediums you enjoy exploring besides poetry?

AS: No, if I said that poetry is life, it would be an understatement, it’s so much more than that

RMMW: I've heard many of your poems being read via different individuals -- what do you relish most about having your work read aloud during a live event?

AS: Not much, very few people can say my fucking name right, I have strange flows to how I write and when people try to read me cold, they normally end up butchering it like Daniel Day-Lewis

RMMW:  You've written a number of different books -- which one is your favourite and why?

AS: I would rather you had asked me to list my top 5 poems that would have been easier to answer.

AS: Sweatshirt, 5:48am Looking At Myself In The Mirror While You Were Still Asleep, Life At 32, East Hollywood, and Postcards To Dogmatic Voices.

RMMW: Do you have any unpublished manuscripts that will be making their way to publication fruition in the near future? If yes, please tell us a bit about this collection?

AS: I’m working on a book at the moment called Coast. All the other unpublished poems I have will go into Sweatshirt, as I work on a 9 year cycle. I’m nearly done with this cycle, then I will go into the third cycle.

RMMW: What do you think is your greatest poetic quality?

AS: I’d love to be able to slow time down to a quantum level and manipulate time.
Reactions: