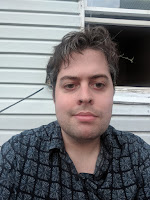 Poet/Writers have incredible gifts that they utilize to explore throughout their work and regardless of what ailment or issue they have – they just keep motoring at their own pace.  Conor Malcolm Crockford is very open about discussing being on the Autism Spectrum – I know, numerous of writers that I’ve interviewed have openly admitted to their disorders and psychosis.  It’s a powerful feeling to use that adversity to create pieces of poetry, that would leave most with jaw dropped mouths open agape --waiting for spiders or flies to simply creep in.  Scribing poetry is not just a practise to most Poets it is a truly emotional experience that links secret stories together,  only those who know the intimate details of a situation would be able to recognise -- to others it’s a powerful piece of work. I’d like to take this opportunity to ask you to follow Conor on Instagram at @florescentjunk you’ll be happy you did – he is such a prolific writer published by a number of reputable presses – Happy Reading.

CC: Usually I put the pencil down in utter frustration and leave it for a day, or I take a quick walk, get out of my head for a second. Writing is not the easiest process, but it may be the most weirdly therapeutic in terms of filtering out your own noise and flotsam to get to what you want to say.

RMMW: We all have to deal with our inner critic, how do you contend with yours?

CC: I either feed the beast with overwhelming self-loathing over how somebody else is better or more successful - Morrissey was right of course - or skip it and go for either end of the spectrum: humble modesty or raw swagger about my work.

CC: I put in earplugs to block out everything and sit down at my desk for about 30 seconds, then just...go.

RMMW: At what age did you start writing?

CC: From childhood I'd say, but I actually started taking it seriously as a vocation or profession when I was 24 or 25. I recognized it as something I absolutely had to commit to, as with certain acts in life: marriage, murder, escaping from prison, etc.

RMMW: What role do you feel social media plays with regards to self-promotion?

CC: God I wish it wasn't part of it but its a big aspect of promoting my work and getting my voice out as well as contacting other writers and publishers. But Twitter and Facebook especially are really toxic services, not just in platforming extremely right wing shitbirds but in promoting endless cancellation culture and selling data to the highest bidder. If I wasn't poor and without certain connections because of my autism, I'd get rid of them both, and I think the former at least is a common viewpoint.

RMMW: What is the relationship between your speaking and writing voice?

CC: I'd say my speaking voice is much more rambling and not as inherently concentrated - that's an autism or "aspie" thing in particular. My thoughts tend to be very fast and I can rush through them if I'm not careful. When I write I tend to get rid of unnecessary language - I even wrote down on a card "Eliminate what is unnecessary" and put it in front of my workspace so I have to look at it - and to pare down to what I really want to say. The difference I guess is in articulation, even if sometimes I say pretentious or, to be generous, poetic things out loud a good chunk of the time.

RMMW: Who are your favourite indie authors?

CC: I'll go to bat for a few local Philadelphia/Pennsylvania writers that I've read with or just know their work: Sean Lynch, Lamont B. Steptoe, Toni Love. Great publisher and poet I knew in Boston is Philip Carmichael. Other indie poets I love are John James and Tina Chang, she's the Poet Laureate of Brooklyn - absolutely extraordinary writing. Non-poets I love are mainly genre writers like Christa Faust and John Langan. Realistic fiction can be great but most of it right now is insufferable. I get no ideas from it.

RMMW: What is your favourite poem written by you?

CC: I quite like "Cool Masculine" which was published in Ethos Literary Journal and it's now in my chapbook Adore. It says exactly what I wanted to get across about masculine images, how strangely powerful but desperate they can be.

RMMW: How do you write, pen to paper or right to the computer?

CC: Pencil to paper - I use mechanical pencils because they feel better in my hands with less of a smudge (spectrum stuff), and legal notepads as I'm left-handed and spiral notebooks are awkward as a result. Then after a few drafts I type into my laptop and fiddle with it until I feel relatively satisfied. The key word here is relatively. Paul Valery said “poems aren't finished, they're just abandoned.“

RMMW: What do you enjoy most about performing spoken verse pieces?

CC: The attention of course. I hate spoken word and slam poetry - even if I see the appeal - but I used to sing in bands and getting to perform in some way is still a lot of fun for me. And sometimes certain pieces work better when I read them out loud, like "King".

RMMW: What inspires you to write?

CC: A mix of things ranging from my childhood, the natural world, the quiet hell of 9-5 jobs, the world around me, politics, and my own weird philosophy that's a mix of anarchism, existentialism, and maybe a little bit of Gnostic or occult thinking. And I'd love to go further and further into those ideas as I go on.

CC: Flying or invisibility so I could do some kind of larceny. Nothing creepy, just sneak into a vault.
Reactions: