I’ve always said it many times on my blog, I’m fiercely jealous of artists because they have so many wonderful tools at their disposal for creating art and as a writer all I have are my pens and parchment – pretty boring if you compare it to the cornucopia of supplies artists have at their disposal.  Steve Zmijewski is a hybrid illustrator and writer – so I’m equally jealous as he can illustrate his own poetry a skill, I know I’ll never have.  All, I’ve ever had are my glitter pens and words.  It’s so impressive to be surrounded by such diverse talent.  For more information on Steve, I’d like to suggest to all of you to give a follow on Instagram @catchstevez or check out his website https://www.catchstevez.com/.

RMMW: Have you ever been creatively blocked, if yes how did you overcome it?

SZ: Life has this funny way of just happening, ya know? But I don’t ever really feel blocked, more or less postponed on a rather general basis. My mind is always moving and rolling something around though.

When I sit down to write or draw/paint and immediately feel disconnected or like I’m just spinning bald wheels, I often jump to a separate notebook or sticky pad full of lists, eventual drawing ideas and bits, pieces, chunks of incomplete poems-to-be. I’ll sift through the wealth of that incomplete stuff to hopefully get myself running in one way or the other. 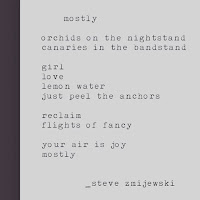 SZ: Yes, that we do. I often like to think of the inner critic as that friend you love to hate or an alter ego of sorts. You listen to what he/she has to say, then you aspire to prove them wrong and ultimately beat them. Not in the physical sense, although that would be quite interesting-like a Tyler Durden/Fight Club kinda thing.

Either that or you compile a bunch of okay, metaphorical poems about it.

SZ: These days it’s a bit harder for me to have an actual process. It needs to be quick and with relatively zero setup. If the mood strikes, say in the middle of the day, which it often does, I try to bottle it and anxiously watch the clock until the kids and wife are asleep.
Then with writing or editing, it really comes down to a glass or two of red wine or a cup or two of black coffee late night-early morning for a few hours.

I can’t really listen to music while I write because it distracts or pulls me out of the mode, but with drawing/painting, it’s the only must. Putting on CDs or turning on a playlist usually gets me to where I need to be.

The bands and artists that I love and their songs serve as a backbeat and major influence on me and all of my work, more than any fine artist or favorite writer/poet has.

RMMW: At what age did you commence writing?

SZ: I don’t know if I could recall an exact age of when I began writing creatively. But I do vaguely remember, 8th grade-ish, age 13 maybe, coming home from school and writing some really young and simple lyrics about love and stuff in a notebook for my made-up band. That may have been the start, but it really wasn’t until freshmen-sophomore year of college that I began exploring with words and taking writing and the action more seriously. And then from there, the mental need and desire sort of became this accessory that it is today.
It’s sincere and vital to put expression down that helps me make sense of things and optimistically, one day become support or encouragement to others who want it.

RMMW: What is your first artistic memory?

SZ: Again, it’s hard for me to recall the exact age, but I remember, possibly around 8-9 years old, sitting at the table with my two younger brothers at each side, drawing cartoon characters and battle scenes.

Oh it’s a very cool feeling. I have two sketchbooks now catalogued at the Brooklyn Art Library through their Sketchbook Project. I feel incredibly proud and happy with my follow-through.
The opportunity was on my radar for a bit before I decided to jump. Then I started 2018 by getting the sketchbook and aimed to use it as a means of creative resurgence. I enjoyed the process I built out of it and many of the brisk sketches done within became more completed products that I now have hanging around my home. I began 2019 the same way and am even more pleased this time around with the final result. 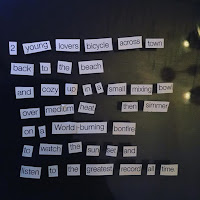 Anyone from anywhere in the world can be a part of the project. Check it out https://www.sketchbookproject.com/

RMMW: What came first your love of poetry or sketching?

SZ: Drawing and sketching with pencils and pens was first by a long stretch.

RMMW: How do you maintain a healthy work life balance?

SZ: I don’t know if I successfully do or subjectively, if I know how to. I try my best for my family and at the end of the day, I am happy with that regardless of how it sometimes feels.
I’ve spent most of my adult, working life juggling 2-3 jobs at once. A full time job, like most, supported by side/part time gigs for the extra cash. I worked as a waiter for longer than I can honestly remember and just decided to pull the plug, for sanity reasons. That’s a positive on the health side, until the lack of extra funds first punches me in the gut. And lately, I have been keeping my notebook and/or a current art project close by on my desk. I’ll add or chip away at it throughout the day to help cut the tension of the daily grind and combat the mind boggling back and forth correspondence with salespeople. 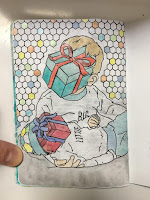 RMMW: What is your favourite sketch drawn by you and why?

SZ: Two months ago, my wife and I welcomed our second child into this crazy world. Naturally, the moment our oldest son first held his new, baby brother was beautifully captured on a cell phone. Somehow, there was a brief moment during the afternoon we arrived home from the hospital where I was able to collect myself. I recreated that photo then, but with gifts for their faces because these two amazing boys are the universe’s gift to me.

RMMW: What is your favourite artist tool?

SZ: My CD and record collection. Haha. I also have this little, letter-number stencil from when I was a kid, which I have taped and re-taped so many times to keep together, but I love to use it for any wording layout I do. 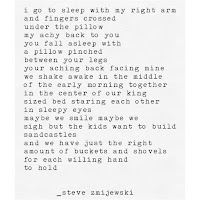 SZ: I would definitely have to say teleportation over unlimited distances. Maybe that combined with a self-cloning ability. The Doctor Manhattan character comes to mind, but he may be too big and powerful of an example and sort of opposed to the particular stance I would take.

I tend to try to be everything to everyone. I try to be everywhere and do everything. This way of being and thinking is obviously impossible, with unfair stress placed on myself, but teleportation + cloning, that would be my solution.

Or maybe what I need is an awesome laser blast fired straight from the fingertips that just destroys everything around so I wouldn’t have to worry about any of what I steadily worry about.