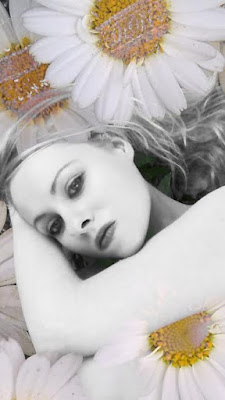 My friend Karina Bush holds nothing back when she writes.  She always goes for the jugular -- no holds barred!  I’m very envious of that characteristic, I’ve always held too much back – it’s quite admirable the way Karina scribes.  In our interview Karina opens-up about publishing topics of a sexual nature and why she relishes the prospect of writing about other subjects as she ages.  Karina has authored three books; Maiden, 50 Euro & Brain Lace.  For more information on Karina check out her website or follow her on Instagram @karinabushxx .

RMMW: Hi Karina! What are you working on now?

KB: Hi Rania! I’m working on loads of different projects right now. A lengthy video-poem of new poetry, it’s a long way from complete, it’s a complex project, technically it’s far beyond my current abilities but that’s why I’m doing it. I’m also writing new short stories, I’ve just finished one I’m happy with, and I intend on completing my collection soon. And I’m writing a play, I’m going to the mountains in a couple of weeks to finish it.

RMMW: Do you think it's easier for a man or woman to write about sexual expressions?

KB: I think it’s equally easy for men and women to write about it, but the reception after publishing is probably not equally easy. I’m not particularly comfortable with publishing sexual content, it has brought unwanted attention my way, some people seem to think they know me because of it, and they don’t. I’m moving away from exploring sexuality in my new stuff, it’s becoming boring to me, I feel like my first two books did it in-depth and for now I’d rather focus on other things. Stagnancy is not healthy, I’d hate myself if I wrote with the same energy in every book, there’s no challenge in that.

RMMW: Do you have any unpublished manuscripts slowly making their way to publication fruition?

KB: Yes, lots. I’ve way more unpublished work than published, but I’m taking my time with things. I’m in no hurry to publish another book, I’d much rather the book be strong than pump work out.

RMMW: How has your writing evolved over the years?

KB: As I mentioned, it is moving away from sexual content, it’s becoming more subtle, the very new stuff. There is so much energy released when you first start finding your voice, and I think much of it is adolescent energy, you are in adolescence as a writer. I can see my work maturing, and I like that, I need that change. It’s so easy to be extreme and wild, for me anyway. I am enjoying restraining myself and setting new boundaries.

RMMW: How many years have you been selected for the 48th street press broadside series?

KB:Six years, plus they published my first book ‘Maiden’ in 2016. Actually, I was watching readings last night from another 48th Street Press writer, Paul Harrison. They published Paul’s book ‘Corrugator’ before my book. Paul is also from the north of Ireland. Strange coincidence for an American press who have published books by only four authors (two of them American small press legends) to have found two writers from the north, with no relation to each other. Anyway, Paul is such an underrated writer and it’s one of the biggest shames I’ve seen in the small press that he has disappeared off the scene. He is structurally and technically perfect as a poet, and his pain palpitates, rare to find that standard of execution.

KB: I wrote and illustrated little books when I was six or seven. A few still exist, they’re so bad, so embarrassing. They’re quite gross, you’d think a boy wrote them, and I was a feminine princess-like child, I wouldn’t have spoken of the things I was writing, I must have been repressing stuff even back then. I’d die if anyone ever saw them.

RMMW: What is the best money you've spent as a writer?

KB: I don’t spend much money on it. I bought loads of weird shit in the early days, things for photoshoots, but now it’s just me and my devices. I would never do photographs again to the extent I did for 50 EURO, although most of that stuff was never published thankfully. Social media has sickened me to selfies and portraits, it’s all so horribly narcissistic and attention-seeking.

Time is my best investment as a writer, I put a lot of time in, time I could be using to make more money, but I’ve made a choice to live in a way that balances earning money with creating. I was at my most unhappy when I was in the rat-race and I’ll never go back to that, it’s like digging your own grave with a noose around your neck.

KB: Yes, most of the time. It depends on what I’m doing. If it’s prose or editing I usually listen to binaural beats, if it’s poetry it’s mostly dark electronica or psychedelic folk, and I have candles and incense burning all day long. When I was writing '50 EURO' I listened to a lot of hard techno. For 'Brain Lace' it was trip-hop, ambient techno, and industrial music. And for 'Maiden' it was 70s acid folk, which I love, the hippy trip had ended and, folk songwriters were on a kind of musical comedown and there were some beautifully twisted masterpieces created in that time.
RMMW: Who are the poets who inspire you?

KB: I’m a sucker for classic poetry. The masters. I can’t get enough of their structures and use of language, and the world it takes me to. I love to feel stricken by poetry, like I want to stab myself in the heart. Contemporary poets who inspire me are Scott Laudati, Brian McGackin, and Carl Miller Daniels - three exceptional poets who deserve a lot of attention. I also admire CAConrad.
RMMW: What's in your bookcase?
KB: I don’t have much with me in Rome. I’ve also been using Kindle a lot in the past few years because with traveling and moving so much it’s just easier. I tend to buy books and pass them on, I don’t collect much. I have a signed Yeats, Huxley, Lawrence, and Welsh, my treasures. Some BareBackPress publications. Scott Laudati, Jean Cocteau, John Fowles, Ovid, Juvenal, Bret Easton Ellis, de Sade, Vonnegut, Ayn Rand, Enda Walsh, Don Cauble. And the latest release from Tangerine Press, 'Scare-Devil', which is full of great poetry and I am very honored to have a poem included, it’s also the most beautifully made chapbook I’ve ever seen, they are top-quality artisans and publishers at Tangerine.
Thank you, Rania, for such interesting questions!
Reactions: