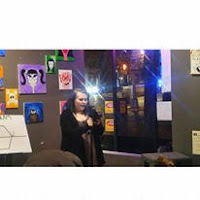 When Rebecca Weber's poetry found its way into my inbox I was genuinely overjoyed. I'd heard a few good things about Rebecca through a mutual friend and was completely hooked upon first read. I would say that this collection of poetry houses such luscious versification affording the reader moments to sink their teeth into something truly delectable.


AN AWKWARD CLAIRVOYANT
I trip over my words in old hallways,
misquoting bible verses to the abandoned
that I can only hope are listening
trapped in a time lapse so long and low
the tide itself cannot reach
a house so haunted
that the dead will not go there.
I try to levitate-
fail
my feet never leave the ground again.
I’ll have to find a different way
to escape the chorus of ghosts
rising from the floor, singing
you should have found a better place
to call home

Are you serious right now? This:
trapped in a time lapse so long and low
the tide itself cannot reach
a house so haunted
that the dead will not go there.

I can clearly see the image of this house through my third eye. It's a century home that's at least seen a few deaths. Something eerie like The Bates home. A place where not even the dead would go that is a pretty powerful image -- in it's own right. We as humans could have the potential to be frightened of the dead but -- what could possibly scare the dead right? Save the fact that they are no longer living so anything related to life would be mute.
SIGNS
In between seasons,
in between my breaths,
I search for signs
in the graffiti
that bleeds in places I used to write
through the drawers of old notes I received
should have returned to sender
there must be more to
simply being an acquaintance
sometimes my own
Achilles heel throbbing
is the final nail in the coffin-
the ultimate warning to give up the ghost
or become one myself
I search underneath the weight of the molded blankets,
the communion gowns,
all of the treasures locked away in the trunk
And once I find the sign I
won’t even make the connection
until years later watching the footage
of my wreck
there’s always something in the background
you always have to watch it twice.
I watch the Christmas lights blinking out one by one
across the hall
I’m starting to think
its some type
of Morse code

The first stanza of Signs completely hooked me – I liked the way Rebecca paired the two themes of seasons and breaths on both a macro & micro level.  I imagined searching for signs during seasons for long term goals and the breaths for short.
In between seasons,
in between my breaths,
I search for signs

Isn't it beautiful? The concept of being in between something there is always an endless possibility where one could potentially search for signs. I must admit, I am constantly looking for signs. Similar to the voice in the poem when my imagination runs wild there is potential for quirky and inquisitive visions -- like perhaps finding morse code in something as simple as Christmas lights. I totally LOVE that!
ON BEING SECURE (HOPEFULLY. SOMEDAY.)
In my wildest fantasies,
I imagine stability.
Stability without sacrifice
sacrifice without ritual
I imagine having roots
what it must feel like to be planted,
to be a small thing,
alive with certainty
that there’s always next spring
what it must feel like as an anchor.
trusting of it’s own slow sinking
to be sure
that my job is nothing more than to live at the bottom
to be sure at all
I pray someday I know it
I know someday I won’t


I think this is my favourite piece out of the three. I've yet to meet a person on this earth who is completely 100% secure. I know from personal experience as I'm sure you do that being secure in oneself is quite the task. I've allowed my mind to wander here a little bit – “what it must feel like to be planted” I imagine myself as tree with my legs as a tree truck and my feet as the roots that must grow into the earth for stability. It's quite a beautiful photograph don't you think? Too bad we are not like Treebeard where we can be planted and mobile in case we want to change directions. The other snapshot that stays with me was the visual used to describe an anchor.  I envisioned the weight of the earth Atlas himself carries on his back. One so heavily anchored in a different fashion than a planted tree. Both of which ooze strength of spirit.

Thank you so much to Rebecca for furnishing me with this bio:

Rebecca Weber is a poet from Keyport, NJ and a headliner in the NJ Poetry Scene. Her debut chapbook, Beauty School Dropout, is forthcoming from Indigent Press March 2017. She is an expert at hiding from people behind garbage cans.