I've literally not reviewed any music for months now, so when the opportunity arose for me to grab my favourite pen & notebook I think -- I may have been a little too giddy! Just a quick backstory, last year April, when I was still writing for The Punk Archive I was asked to review a poetry book. More specifically, Scott Laudati's, Hawaiian Shirts in the Electric Chair (which in my opinion is -- fucking brilliant!) That was the start of my journey, absorbing everything Scott created regardless of medium: Poetry or Music! Too much talent in one person is so unfair (especially since Mrs. Acoustic (my fender six string) constantly stares at me, probably feeling neglected & wondering when she is finally going to played!

Now, that being said, the four hardcore individuals who are responsible for the American Inc. sound include: Scott Laudati: Guitar/Vocals,  Myles Vlachos: Guitar/Vocals/Organ/Trumpet/Harp,
Brian Weakly: Bass & on Drums: Travis Scelia. Right, so let's get on with it...

American Inc., the NO record, Time Before Zero

If you want a healthy dose of “it is what it is” without any excuses as to why life and society are so viciously screwed up -- you will find it inside of the tracks housed within “the NO record”. From the looks of it, no topic was off limits... sex, drugs, education, music, politics and social issues in one EP. Which brought me to a place of meditation, thinking about words, wordplay and dual meanings. One of the best things about reviewing music is that it really does afford for ones mind to wander and pause... After listening to “the NO record”, it could have very easily been titled “the KNOW record” simply because so many experiences manifest, to foster not only a strong musical sound but-- lyrics also.
American Inc., the NO record, Kill 'Em All

Suffice it to say, “the NO record” reminds me of jawbreakers, not small box variety of Wonka Gobstobers that could be chopped in 5 minutes. I am talking about the BIG ass 3 3/8” The Mega Bruiser. And, here is why, much like an onion it obviously has layers that's almost always used as an analogy to measure depth. However, in this instance these layers never bleed into each other and are separated by a thin layer of neutral colour & flavour as to not overwhelm the: exotic, delicate & tenaciously vibrant hue palette. I detest it when bands release almost a type of photocopied sound from the first to the last song. When I listened to “the No record” I heard so many different musical genres incorporated within the sound... which makes it even more ridiculously terrific.

As an example let's take the title track “I want to die” I never in a million years expected to hear the massive microphone sound of Doo Wop group, blended with lyrics that have no business being paired with anything outside the realm Punk. (There in lies the genesis of the punk world -- Musicians & Singer/Songwriters telling the world anything goes...) But, it works, actually, not only does it “work” in my opinion -- it is quite brilliant!!! While “I want to die” starts with a mellow melody saturated with ooh & ah's -- the lyrics are certainly not soft. That type of out of the box contrast houses the basic fundamental premise of music regardless, of genre... if you can make it work.. go for it! I'm still shaking my head even now, as I write to finish this sentence.... It's just so good!

American Inc., the NO record, The Girl Said She Was Punk Rock

The impact here could be seen more on a wider scale because, that kind of flexibility and thought of mind is what we need to elevate our world to a better one.

One thing for certain, Scott doesn't mince his words. I didn't know what to expect from one song to the next, the variety is beyond compare. If, I have to nail my favourites from “the NO record” they would include.. Oh, hell, who am I trying to convince? I relished all of them.... 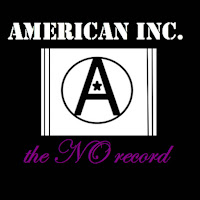